You are viewing:-
you're reading...
1.Market Observations 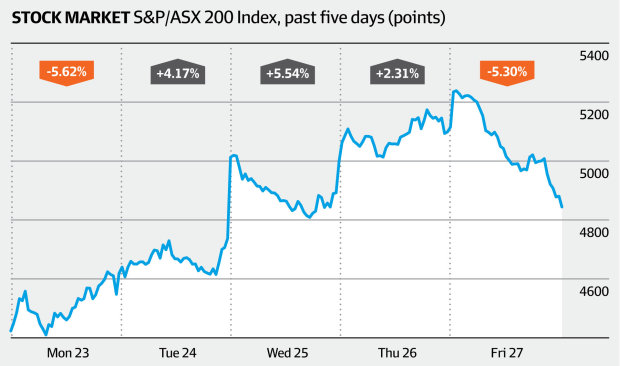 ‘After four weeks of heavy falls, the sharemarket has ended its fifth week since the sell-off began marginally higher as government and central intervention contends a deepening economic and health crisis. The S&P/ASX 200 Index closed 25.8 points, or 0.5 per cent, higher over the five sessions to end the week at 4842.4 points.

‘The week was book-ended by heavy falls – 5.6 per cent on Monday and 5.3 per cent on Friday – which came close to erasing the entire 12.5 per cent rise delivered during the first back-to-back gains since the market turmoil began. The end to the significant rally follows news that the total number of cases in the US had overtaken both Italy and China, threatening the notion that the world’s largest economy would be back to work by Easter as hoped by US President Donald Trump. Adding to the woes, the number of jobless hit its highest recorded level, with 3.3 million Americans applying for unemployment benefits last week.’

Brainy's Share Market Toolbox. Read the honest truth about the sharemarket. Develop or fine tune your investing/trading strategies using share price charts (technical analysis), or learn about the investment strategies of others. Melbourne (Australia) based - supporting share market investors and traders to build wealth through smarter investing using my Share Market Toolbox arsenal of tools to tackle the market.
View all posts by robertbrain »
« 28 March 2020 (AFR) – Big Rally crumbles after $US2trn stimulus optimism fades
1 April 2020 – Taking a break for a while »